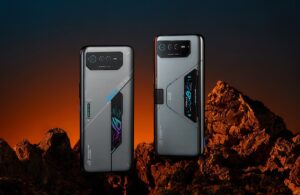 As promised late last month, ASUS has officially launched two of the latest members of its ROG Phone 6 family. These include the ROG Phone 6D and 6D Ultimate, and what sets them apart from the original duo that launched in July is the fact that they both run on MediaTek’s flagship-tier chipset, the Dimensity 9000 Plus.

Despite having different names, the only notable differences between the two models are their storage capacity and internal cooling system. Besides that, everything else about the ROG Phone 6D and 6D Ultimate are pretty much identical.

That being said, the duo also share the same design as their respective Snapdragon-equipped siblings. To be more specific, both of the newer models come with a 6.78-inch OLED panel with 165 Hz refresh rate and HDR10+ support, as well as an RGB-enabled ROG logo on the rear panel for the standard model and a customisable ROG Vision colour display for the Ultimate variant. Additionally, ASUS assured that both phones are compatible with the same first-party accessories that are released for the original ROG Phone 6 and 6 Pro.

For both phones, paired together with the high-end Dimensity 9000 Plus chipset is 16 GB of RAM. The standard 6D features 256 GB of storage, whereas the 6D Ultimate has 512 GB instead. Unique to the latter model is its AeroActive Portal cooling system on its back, which opens up a direct airflow to its internal cooling components via a motorised hinge when the phone is connected to ASUS’ AeroActive Cooler 6 accessory.

Like their Snapdragon-powered siblings, the duo also feature a battery capacity of 6,000 mAh which promises over 18 hours of usage. Similarly, they also come with 65 W fast charging via USB-C Power Delivery, allowing for a full charge in just around 40 minutes.

ASUS didn’t change much in the camera department for the ROG Phone 6D and 6D Ultimate either. Found on the back of either model is a 50 MP primary camera, joined by a 13 MP ultra-wide and a 5MP macro. Meanwhile, situated on the upper bezel of their displays is a 12 MP selfie camera.

The new ASUS ROG Phone 6D and 6D Ultimate are set to arrive in Europe soon, though no word on when they are expected to arrive for other markets. Both gaming smartphones are only offered in a single Space Grey colour, and are priced at EUR 949 (~RM 4,314) and EUR 1,399 (~RM 6,360) respectively. It’s worth noting that the Ultimate model is also bundled together with the AeroActive Cooler 6 attachment.