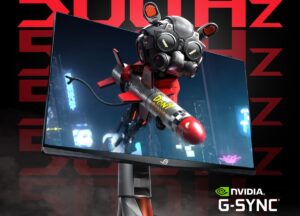 Earlier today during NVIDIA’s Computex keynote, the GPU brand helped its brand partner, ASUS, by announcing the ROG Swift 500Hz. As its name suggests, the new gaming monitor is the company’s – at this stage, even the world’s – first desktop display capable of achieving refresh rates of up to 500Hz.

Specs-wise, the Swift 500Hz is a 24.1-inch Full HD display, using an Esports-TN (E-TN) panel that is especially designed to produce 60% shorter response times than the standard TN LCD display. More importantly, and in addition to the 500Hz refresh rate, this gaming monitor is also an NVIDIA G-Sync monitor and even comes with the GPU brand’s own suite of technologies built into it.

Naturally, this includes NVIDIA’s Reflex Analyzer which allows gamers to measure their in-game latency easily, through a single click. Additionally, the display has a peak brightness of 400 nits, while the ports included on the monitor include a DisplayPort 1.4 port, an HDMI 2.0 port, two USB 3.2 ports, and an earphone jack.

ASUS has long had a history of producing gaming monitors with higher than average refresh rates, with its first monitor going all the way back to 2012, when 144Hz was still considered the bee knees. A few years later, the company introduced 240Hz gaming monitors and back in 2020, it launched the ROG Swift 360Hz, a 24.5-inch gaming monitor with a display panel, manufactured by AU Optronics.

Unfortunately, at the time of the announcement, ASUS did not say when the monitor would be available, nor did it mention just how much the monitor will cost.