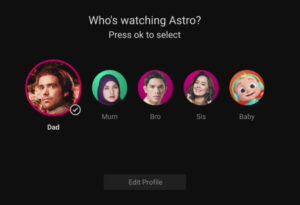 In addition to announcing the arrival of the Disney+ Hotstar app for the Astro Ulti box, the satellite TV company also revealed that a new update has been deployed to deliver the capability to have multiple user profiles on a single Astro connected box. You may have seen similar features on streaming services such as Netflix, or modern game consoles.

The update has also been rolled out to the Astro Ultra box and Astro GO mobile app. In general, this feature allows users to set up to five different profiles on all three platforms.

Each of these profiles will receive its own personalised content recommendations based on its user’s viewing habits. They also have the capability to store their own Watchlists and Favourite Channels in addition to user-specific Continue Watching lists and avatars.

For parents and guardians out there, they can also set a Kids Profile that will activate the dedicated environment that focuses on children’s content. The update for the Astro Ultra and Ulti boxes also delivers the nifty Thumbnail Viewing capability which provides a preview of the content when you scroll through the progress bar of an On Demand content.

In addition to that, users can now also directly enter and play Netflix content when they click on its display image at Ultra or Ulti’s home screen. The update for the Astro GO app has also implemented Voice Search functionality which allows users to just utter the search term instead of typing them one by one.

That being said, one still has to press the mic icon on the search bar in order to utilise this feature. Not to forget, you may need to enable certain options in your phone’s permission settings to allow the app to utilize the voice feature.

Astro said that the update for all three platforms has been deployed to users since 19 August. To check whether your Astro Ultra box has received the update, check out the Settings section to see whether the box is running on firmware v22.1.6.28.

For Astro Ulti box, the new update is labelled as v22.1.6.32. while Astro GO app users can update to v22.2.4 to obtain the new Multi-User Profile and Voice Search capabilities. Meanwhile, do check out the update’s FAQ document [pdf] on Astro’s official website if you need further clarifications.

The post Astro Ultra and Ulti Box Users Can Now Set Up To Five User Profiles appeared first on Lowyat.NET.