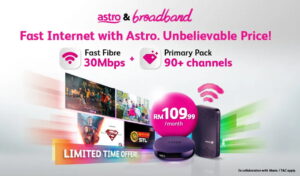 Astro today has revealed Pakej Jimat 109 which offers the baseline Primary Pack and broadband service in one single bundle for RM109.99 per month. Depending on where you live, the broadband speed that you will get through this time-limited promotional package is either 30Mbps or 50Mbps.

If your area is covered by TNB’s Allo, the fibre broadband speed that you will receive together with Pakej Jimat 109 is 50Mbps. However, Allo coverage is still quite limited at the moment as it is only available in certain areas within Cyberjaya, Penang, Melaka, Perak, and Kedah.

For the rest of the country wherever Maxis Fibre is available, the speed that is attached to their Pakej Jimat 109 will be 30Mbps. Here is the kicker: the monthly fee remains identical at RM109.99, regardless of the broadband speed.

As noted in the table that we featured earlier, this rather bizarre speed allocation still applies if you choose to take the higher-end content package. The table also noted that the Pakej Jimat 109 customers will be provided with the Astro Ulti Box which means that its resolution is limited to Full HD, unlike the 4K-capable Astro Ultra Box.

There is no 50Mbps option listed on Astro’s website which means that the extra capacity could be something that was decided on Allo’s end. Outside of the Pakej Jimat 109, the Primary Pack with 30Mbps would usually cost RM139.99 per month.

There are additional details that have not yet been mentioned on Astro’s website at the time this article is published although we have indeed verified them with the company’s representative. For example, Pakej Jimat 109 can still choose whether to have the Plug & Play setup which relies solely on Internet connection or have Astro’s team install the traditional satellite dish at their home.

Normally, Primary Pack subscribers need to pay an activation fee for their Astro Ulti Box but since the Pakej Jimat 109 is considered as an Astro & Broadband plan, the activation fee will be waived just like a standard Astro & Broadband bundle. This is regardless of whether you choose the Internet-only Plug & Play setup or traditional satellite dish for your Pakej Jimat 109.

Not to forget, the Pakej Jimat 109 also comes with a 24-month contract which is something you may already expect from Astro. As mentioned earlier, Pakej Jimat 109 is a time-limited promotional package as it is only available until 7 March 2022.

Additionally, the package is not being offered directly through Astro’s website. Instead, you have to call or send a WhatsApp message to Astro’s customer service agent at 03-74813000 if you want to sign up for it.