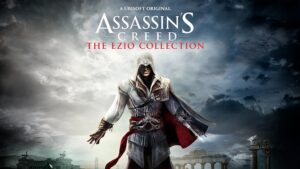 Arguably the best games in the Assassin’s Creed series were those from the Ezio trilogy, Assassin’s Creed II, Brotherhood and Revelations. Next month, these three titles will be made available on the Nintendo Switch.

Neither are new, and in fact, you can watch them for free on Ubisoft’s YouTube channels. But they serve to add more lore to the story of Ezio Auditore. The former tells the tale of his father, and his deeds while he was still alive. The latter tells of his last days, and ties it to Assassin’s Creed Chronicles: China.

But back to the games. You’ll be glad to know that these are games that run directly from the Nintendo Switch, and not via streaming the way it was for Assassin’s Creed: Odyssey.

Assassin’s Creed: The Ezio Collection, will be available on 17 February 2022 for US$40 (~RM163). They are old games, but well worth playing if you haven’t done so before. Especially fun is Assassin’s Creed: Brotherhood, with the overpowered recruitable characters at the end of the game.