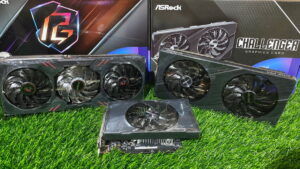 There are only a handful of graphics card manufacturers that have released their take on the Intel Arc desktop GPU with one of them being the Taiwanese hardware company, ASRock. Almost two months after the Arc A380 Challenger ITX was released on our shores, its two higher-end siblings have finally made their way to Malaysia.

Specifically, the two models come in the form of Arc A750 Challenger D OC and Arc A770 Phantom Gaming D OC. As noted in our previous report, the Arc 7xx Series have been designed mainly for high-performance gaming.

Hence, both of these models have much higher core counts, ray tracing units, VRAM amount, and memory bandwidth than their A380 counterpart which was meant for the entry-level segment of the market. Meanwhile, do note that both of these ASRock cards actually run at 2200MHz which is much higher than Intel’s reference specs.

Being higher-end models, this also means that they consume more power than the A380 as noted in the general specification list above. According to ASRock’s website, both of them are equipped with two 8-pin power connectors as well as 8GB GDDR6 VRAM.

ASRock has also equipped them with different sets of thermal solutions as the Arc A750 Challenger D OC card with a dual fan solution while the Arc A770 Phantom Gaming D OC has three fans instead. According to the pictures on ASRock’s website, the latter may have a bigger copper base and more heat pipes as well in order to have a wider contact area for the GPU.

Of course, another major difference between them is pricing. In an announcement by Achieva Malaysia which is the distributor for all three ASRock Intel Arc cards in Malaysia, the Arc A750 Challenger D OC costs RM1,499 while the Arc A770 Phantom Gaming D can be obtained for RM1,770.

As per Arc A380 Challenger ITX, Achieva Malaysia didn’t provide any retailer list for these new ASRock Intel Arc graphics cards in its announcement though. So, you may want to check out your favourite PC hardware retailers for more information about their in-store availability.

The post ASRock Intel Arc A750 and A770 Graphics Cards Now In Malaysia: Starts At RM1499 appeared first on Lowyat.NET.