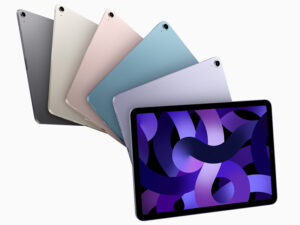 Apple’s latest addition to its tablet family, the fifth-generation iPad Air, has finally made its way to Malaysia. The new tablet is virtually identical to its predecessor on the outside, but under the hood, it houses major improvements.

To quickly recap, it is powered by the Apple Silicon M1 chip, the same CPU that powers the current MacBook Air. It’s also got a higher resolution 12MP front camera with Center Stage and the cellular version now supports 5G. The display uses the same 10.9-inch Liquid Retina display and it retains the Touch ID sensor on the top-right corner of the tablet.

The new iPad Air comes in five different colours: space gray, blue, pink, starlight, and purple. In the box, you’ll find a USB-C to USB-C cable and unlike with its phones, Apple ships the tablet with a power adapter. You can buy the tablet via the Apple Malaysia website now or through its authorised resellers.