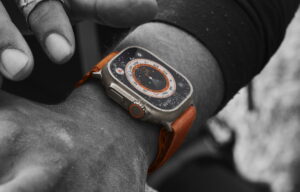 Said to be years in the making, Apple today has unveiled an all-new member for its smartwatch family called the Apple Watch Ultra alongside the equally new iPhone 14 & 14 Plus,  iPhone 14 Pro & 14 Pro Max, Apple Watch Series 8, and the second generation AirPods Pro.  Based on the presentation that Apple gave at its Far Out event this morning, it seems like that there are plenty of reasons why the new smartwatch deserved its “Ultra” moniker.

For example, the new model has been provided with the biggest case so far for an Apple Watch at 49mm. Made from aerospace-grade titanium, it is being accompanied by a flat sapphire crystal to help protect its Retina display that Apple claimed as the brightest in the family due to its 2,000 nits rating.

With a massive on-wrist operating temperature from -20C to 55C, the Ultra has been also designed to withstand water depth of up to 100 meters. This means that the smartwatch can be used for scuba diving but Apple has noted that users should only use it to dive up to the depth of 40 meters as that is the very limit of the Ultra’s depth gauge.

Speaking about diving, the Ultra is EN 13319-certified device as well. It has been also equipped with the new Depth app that provides several important diving metrics including time, current depth, water temperature, diving duration, and max depth.

To take things further, a collaboration with Huish Outdoor has led to the creation of the Oceanic+ app that transforms the Ultra into a dive computer. This app is certainly more extensive than the standard Depth app since it carries more advanced features including Bühlmann decompression algorithm, dive planning, no-decompression limit, ascent rate, safety stop guidance, current & local dive conditions reports, personalized user profile, and a dive logbook that syncs automatically to one’s iPhone together with the ability to share it with friends and family.

In order to allow them accessible while wearing gloves, Apple has also made the side button stands out from the case while the smartwatch’s Digital Crown also has a larger diameter and more prominent grooves. There is also the new Action button on the left side of the watch that can be customised to activate certain functions.

Among them is the Compass Waypoints which can be used to mark a location directly into the Compass app. The Action button can also be used to start or view Backtrack which is a function that users can used to trace back their steps if they found themselves lost during their outdoor exploration.

The new button can be used during other scenarios like if you want to start a workout, move to the next segment within the workout, or mark segments during track running. Similarly, those who are engaged in a Multisport workout such as triathlon can press the button when they are transitioning to next leg of their workout.

Another feature that made the Ultra quite different from other Apple Watch model is its siren which can emit an 86dB sound that can be heard as far as 180 meters away in order to attract help. To further ensure that its wearer can use the watch to communicate even in harsh conditions, the Ultra has been equipped with three-microphone array that is paired with adaptive algorithm and AI-powered noise filter alongside dual speakers.

To further enhance the Ultra’s GPS capability, Apple has added the support for L5 GPS in addition to the traditional L1 GPS signal. Working hand-in-hand with a new antenna design, Apple said that this allows the watch to deliver more consistent GPS performance even when there are a lot of tall buildings or trees around.

The company has also crafted a watch face exclusively for Ultra called Wayfinder that not only has a compact directly in the dial but also has space for up to eight complications. Users can also use the Digital Crown to activate its Night Mode’s red interface that allows for better visibility in the dark.

Apple pointed out that the Ultra has enough battery power for most users to complete a long-distance triathlon (known by many as the Ironman Triathlon) which includes a 3.86 km swim, 180.25 km bike ride, and 42.20 full marathon back-to-back. As for the exact figure, the company said the watch can go up to 36 hours during normal usage and a low-power option which reduces the frequency of GPS and heart rate readings that will be implemented later this year can stretch the battery life even further at up to 60 hours.

Just like the Apple Watch Series 8 and 2022’s SE, the Ultra also comes standard with the Crash Detection feature that is powered by two new motion sensors and sensor-fusion algorithm. The same goes to the new temperature-sensing capabilities for women’s health are also there on the new flagship smartwatch together with the standard heart rate monitor, ECG, and Blood Oxygen sensors.

To accompany the new Ultra model, Apple has also come out with several new bands including the Alpine Loop that is designed for outdoor adventures. There is also the Trail Loop that is meant for endurance athletes while divers and water sport lovers might be interested in the Ocean Band.

When it comes to availability in Malaysia, there is no set release date for the Apple Watch Ultra just yet. That being said, Apple Malaysia’s website has since listed it for RM3,799 regardless of whether you choose Alpine Loop, Trail Loop, or Ocean Band to go together with it.

The post Apple Watch Ultra: Made For Adventurers, Endurance Athletes and Divers With A Price Tag Of RM3,799 appeared first on Lowyat.NET.