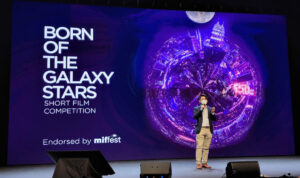 Today, everyone is a content creator. You probably just posted a status update on that spicy Samyang ramen you had for lunch? Or maybe you’re taking travel footage for your weekly vlog, or editing a video about your recent shopping haul that you’re planning to upload on your Youtube channel very soon?

You may not have noticed, but the fact that you’re constantly taking photos, editing videos, thinking of an attractive caption to share, as well as having the eagerness to engage and entertain shows that you are a content creator! So now, have you ever thought about taking your creativity to a whole new level? If you do, keep reading as we have something VERY exciting to tell you!

Born Of The Galaxy Stars: A Short Film Competition

The Samsung Galaxy S22 Ultra is receiving bumper response for its impressive features and sleek modern design. Now, to elevate the game to a new level, Samsung Malaysia is hosting a short film competition named ‘Born Of The Galaxy Stars’!

The company is hoping to provide a stage for all aspiring filmmakers where they can showcase their masterpieces to a bigger audience, and most importantly, have their voices heard in a digital space filled with like-minded individuals and film fans.

How To Participate In The Short Film Competition?

To participate in the competition, participants will need to submit a short script or a synopsis to MIFFEST with the theme “Borderless with Nightography,” that includes one of the concepts: Fashion, Fitness, Romance and Music by 24 April 2022.

Samsung Malaysia and the MIFFEST committee will then select 22 candidates (also identified as ‘Entrant’) based on their creativity, storyline, performance and message of the stories. Successful entrants later on will be presented with one unit of the Samsung Galaxy S22 Ultra phone to shoot and produce the short films according to the stories they submitted.

The video production will then be in the running to win amazing awards including cash prizes, a trophy, Samsung products, and the chance to network with industry leaders during the MIFFEST event. And that’s not all! The Best Short Film Winner (Grand Prize Winner) will be awarded the opportunity to work with Samsung Malaysia Electronics for content creation – a career that so many of us had dreamed of!

So, are you in for the challenge? If you have a strong passion in filmmaking and wish to have a breakthrough in your creative journey, we urge you to take action now by reading more about the competition through this link.

Already have a well written script? Then quickly submit your story to MIFFEST over here!

This article is brought to you by Samsung Malaysia.

The post Anyone Can Be A Filmmaker By Joining Samsung’s Short Film Competition! appeared first on Lowyat.NET.