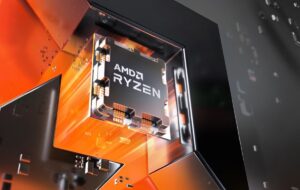 AMD’s Ryzen 7000 Series desktop CPU lineup was only just launched last month, but as usual, that hasn’t stopped the brand’s rusty plumbing to spring a few more leaks. Case in point, new benchmark details allegedly belonging to a non-X Ryzen 7 7700 CPU has made its way online.

Discovery of the 7700 was first posted on Twitter by the repository, Benchleaks (@BenchLeaks), which in turn was posted on the benchmark site, Geekbench. According to the site’s product page, the CPU scored 2062 points on the Single-core test and 12685 in its multi-core test.

Additional details shows that the 7700 was tested with an ASRock X670E Taichi motherboard, along with 16GB of DDR5 RAM running at 2400MHz or 4800MT/s, in case you’re wondering why the former is much lower than the usual speeds.

In terms of specification, the 7700 appears to be similar to its more powerful 7700X brother; it comes with 8-cores, 16-threads, has a base clock of 3.8GHz, and a boost clock of 5.3GHz. That being said, its scores show that, as the title of this article suggests, that it is around 13% faster than the 7600X’s, AMD’s mid-range CPU and one that we are currently running tests on in our lab. For the record, the 7600X scored 11215 points in the multi-core test of the same benchmark.

Beyond the stats and benchmarks, there is still limited information surrounding the Ryzen 7 7700. In addition to that, AMD itself hasn’t provided official confirmation about its existence, and also when it will be available. That availability factor is also a huge if; the CPU and GPU maker has a tendency of making non-X variants of its Ryzen processors available only through OEMs for a limited period of time, before ultimately allowing its retail partners and distributors to sell them individually.

In any case, none of these details seem to be final, so you may want to wait a while before taking these numbers as the gospel truth.