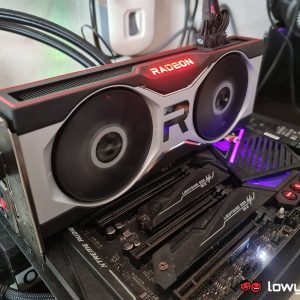 Lenovo’s plumbing has been on a roll of late. Earlier today, we reported on the possible existence of NVIDIA’s first Ampere-based GeForce MX550 GPU in one of its laptops, paired with a yet to be announced 12th gen Intel Core i7. Now, on the opposite end of the spectrum, it appears that the entry-level AMD Radeon RX 6500XT has made its appearance.

The discovery was made by yet another popular leakster, Komachi Ensaka (@KOMACHI_ENSAKA) – who posted evidence of the 6500XT’s existence – of which they had obtained via a listing of the Lenovo Legion T5 prebuilt PC. Sadly, the listing has long since been removed by Lenovo, but not before Komachi was able to take a screenshot of the GPU’s details.

According to the product listing, the 6500XT will have 4GB GDDR6 graphics memory, along with two display output connectors: an HDMI 2.1 port and DisplayPort 1.4a. And while it is unmentioned, the 6500XT will be based on AMD’s RDNA2 GPU architecture but more specific to the card, it will be based on the Navi 24 GPU. Oh, and it is likely to ship out with 1024 Stream Processor, at the very least.

At the time of writing, we still don’t know when exactly AMD intends to announce the card, but at this stage, it is looking more and more likely that it could be announced during the company’s CES keynote next year, which is scheduled to take place on 4 January.