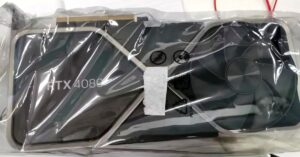 NVIDIA’s launch of its Lovelace-powered GeForce RTX 40 series is just around the proverbial corner, but as things on the internet go, someone has leaked a picture of an alleged RTX 4080 Founders Edition (FE) inside an anti-static bag. This marks the second time a physical image of a next-generation card has appeared online, the first having been the alleged heatsink of the RTX 4090.

The image of the RTX 4080 was first posted on Twitter by the Japan-based hardware leakster, Elysian Realm (@KittyYYuko), and there happens to be a few points about it to take note of. To start, the size of the cards looks nearly identical to NVIDIA’s current RTX 3090 FE, and that’s based on the size of the fan.

On another note, the leaked image also seems to hint at NVIDIA’s desire to retain its Dual Axis Flow Through design with the RTX 4080 and, along with it, its uniquely designed PCB V-cut PCB. However, the one design difference that seems to stand out from the picture is the card’s logo or more specifically, the choice of font.

According to Videocardz, the font for the numeric portion of the logo is a new style known as NVIDIA Sans NALA and it’s a lot less aggressive or blocky-looking than the font that the GPU brands uses, both for current and past GPU generations.

At the time of writing, information about the RTX 4080 has not been as bountiful as those surrounding NVIDIA’s next-generation Lovelace flagship, the RTX 4090. To date, online rumours are suggesting that the card will be based around an AD103-300 GPU, have 76 SMs, 9728 CUDA Cores, at least 16GB GDDR6X graphics memory running at a frequency of 23Gbps, a 256-bit memory bus, a 736GB/s bandwidth, and a TDP of around 340W.

On another note, some sources we spoke to have suggested that NVIDIA could be planning on launching the RTX 4090 all by its lonesome this year and save the RTX 4080 and the rest of its siblings in January next year. Apparently, the alleged reasoning behind this is that the company wants to at least try and reduce the surplus of its Ampere-based RTX 30 Series GPUs.