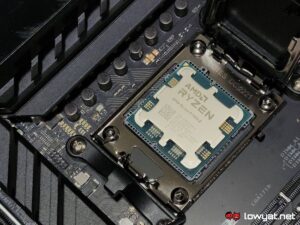 Hot on the heels of the announcement of a non-X Ryzen 7 7700, new details of what is purportedly a Ryzen 7 7800X has popped up on the radar. The alleged Zen4-based CPU and its specifications were found on the benchmark site, Geekbench.

The emergence of the 7800X marks the second AMD Ryzen 7000 Series processor that AMD has yet to announce to the masses. Specs-wise, Geekbench lists it down as having a 10-core, 20-thread configuration, while obviously based on the new 5nm process node from TSMC. The last time we saw a CPU with that core and thread count was when we reviewed Intel’s Core i9-10900K, a CPU whose configuration was short-lived as its parent company returned to the more conventional 8-cores, 16-threads configuration in the following 11th generation lineup.

Moving on, the alleged 7800X is shown having scored 2097 points in Geekbench’s single-core test and 16163 points for the multi-score test. Additional details also show that the CPU was tested with a B650 AORUS Elite AX motherboard from Gigabyte, along with 64GB DDR5 RAM running at 3600MT/s. The choice of memory and its frequency is questionable, given that most the average speed for virtually all DDR5 memory is at least 4800MT/s.

In addition to the 7800X, there also seem to be details of a Ryzen 3 7300X. As per the Geekbench product page, this is a quad-core CPU but what is impressive is that it has 32MB of L3 Cache and the ability to hit a boost clock of 5GHz. To that end, it also attained a single-core score of 1984 and a multi-core score of 7682.

Again, there has still not been any official word from AMD about the existence of both the Ryzen 7 7800X and Ryzen 3 7300X, and it doesn’t appear that the chipmaker will be making the announcement anytime soon. Who knows, maybe we’ll hear something about them next week during its supposed RDNA3 announcement, albeit briefly.