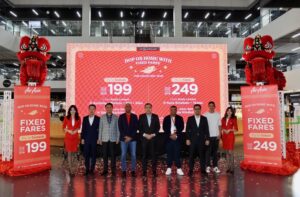 Every year during major holidays, we hear stories of East Malaysians lamenting about the exorbitant amounts of money they’ve had to cough up for flight tickets from the Peninsula to East Malaysia. For the upcoming Chinese New Year holiday season though, budget airline AirAsia has announced one-way fixed fares for its flights between both parts of the country.

From 17 to 30 January 2023, there will be special extra flights with fixed prices so that Malaysians can return to their hometowns to be with their families without being price-gouged due to the usual high prices caused by skyrocketing demand. The fixed-priced CNY seats, priced at RM199 for travel to Sarawak and RM249 to Sabah, are available starting immediately.

There will be a total of 52 special flights in total during this period, travelling from Kuala Lumpur and Johor Bahru to six East Malaysian destinations. From KL, these flights are available for Kuching, Sibu, Miri, Bintulu, Kota Kinabalu, and Tawau whereas they are also available for those in Johor Bahru with the exception of Bintulu and Tawau.

Based on the schedules posted, the fixed low-fare flights are only available for late-night travel though. The earliest special flight is from Kuching to Kuala Lumpur at 9.55 PM whereas the latest one departs at 5.25 in the morning from Kota Kinabalu to Johor Bahru.

According to the budget carrier, these additional trips will provide travellers with a total of 25,020 extra seats for the festive period. Aside from the special extra seats, AirAsia will also be running its usual 274 weekly flights to the aforementioned destinations, though these will have regular fares that will likely shoot up in price when demand rises.

Transport Minister Anthony Loke said AirAsia’s announcement is part of the government’s initiative to bring down travel fares during important festive seasons. Loke said that it was a “very personal initiative” that was part of his election manifesto.