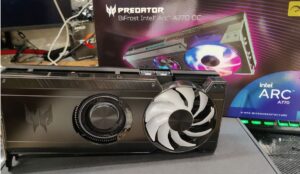 Reviews of Intel’s ARC A770 graphics card are already out and about, but as you can see, they’re focused on the chipmaker’s Limited Edition version. That is, until recently, when one Israeli tech website managed to get their hands on Acer’s very first graphics card, the Predator Bifrost A770.

To quickly recap, Acer made some small but significant waves last week, after it announced its decision to enter the desktop graphics card market with the launch of the Predator Bifrost A770. It sports a unique dual-fan configuration comprising a blower-style fan and an open-air style fan.

Getting back on point, the Acer-branded A770 made a surprise appearance on the Israeli website, Plonter.info, which claims to have already reviewed the card in full. Specs-wise, the Bifrost A770 that Plonter managed to obtain is apparently a 16GB version, and not an 8GB model that Intel says will be the standard edition for the majority of its board partners. On another note, it is also the first time we’ve gotten a better look at the card’s backplate, or lack thereof. Ports-wise, the card ships out with three DisplayPort 2.0 ports, which is a first for any graphics card, along with an HDMI 2.1 port.

At a glance, we can see that the heatsink of the Bifrost A770 is longer than the sum of its part. That being said, this motif and choice of design has been the norm for the majority of graphics card manufacturers for years now, meaning that Acer is, understandably, looking to play it safe in the aesthetics department.

In any case, the Bifrost A770 was tested with an Intel Core i7-12700KF CPU, an ASUS TUF Gaming Z690-Plus D4 motherboard, and 32GB of DDR4-3600 RAM, from G.Skill. The synthetic benchmark portion Plonter specifically used in its review seems to be limited to just UL’s 3DMark, and FurMark. As for gaming, the tech site includes a total of nine titles, running in a mix of 4K and Full HD resolution. The former is a bit of an odd choice as well, seeing how Intel is clearly marketing its top-end ARC graphics card to give NVIDIA’s mid-range RTX 3060 Ti and AMD’s Radeon RX 660XT a run for their money.

You can check out Plonter’s finding on its own site, but just so we’re clear, the review doesn’t contain any pricing for the Predator BiFrost A770 yet. As for the launch date, the GPU itself will be launching on 12 October.