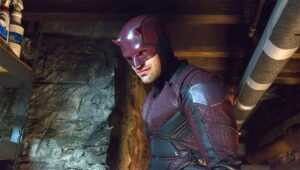 It looks like Marvel’s Daredevil series is making a return to the stream, although it is clear that the show that made its debut on Netflix will now be streaming exclusively on its newest home, Disney+.

According To Variety, the new script for the series will be helmed by Matt Corman and Chris Ord, both of whom are famed for penning the stories of popular drama series’, chief among which being The Brave and The Enemy Within. While no specifics have been released so far, it is likely that Disney will be bringing back Charlie Cox to reprise his role of Matt Murdock and the titular character, which is really the only logical choice, given that the man himself made a return to the silver screen on Spider-Man: No Way Home. However brief the cameo was.

To quickly recap, Netflix’s Daredevil came to an abrupt halt back in 2018, after just three seasons, when Netflix cancelled the series. The third and final season picked up where The Defenders – also another Netflix series that ended after just one season – ended: with Murdock left in Saint Agnes Orphanage, all wrapped up and bandaged from his fight with The Hand. For another matter, the show could also signal the return of Vincent D’Onofrio to the role of Kingpin in the series, although to be fair, D’Onofrio technically already made his return to the role in the Disney+ series, Hawkeye.

Another potential reason to the revival of Daredevil is because of Marvel now tapping into the Multiverse: with the screening of Doctor Strange: Multiverse of Madness, the Marvel Cinematic Universe (MCU) can now easily create new series out of old and new characters and simply tie them to a different, to best suit their narrative. Having said that, whether or not the new Daredevil series becomes a hit will boil down to the showrunner’s capability in telling and tying the character into the MCU.

The post A New Daredevil Series In The Works For Disney Plus appeared first on Lowyat.NET.